Note: This modded & patched version isn't perfect with working on 6.60 CTFs, but pretty "friendly" with that kernel, if you know or learn how to use the program properly.

Ok, this isn't an official release, which at this point is probably unlikely to happen. I heard the reason it was never officially updated is because patpat (the original dev) lost the core files necessary (or something or another), and he never ended up rebuilding/updating it.

Anyways, there's a couple of modifications I made to this. I don't remember the details of the first modification, though it's a fairly well known process by those that mess with CTFs. It's been quite awhile since I performed this mod to the utility. IIRC, it basically involved dumping files from my PSP on 6.60, converting them with Resurssiklunssi, swapping the files out into certain folders in CTF Tool GUI, and editing a cfg file. I don't remember what else (if anything). I remember at the time though wishing that somebody woulda just uploaded an already modified version of the app, as I was unclear about some of the details of the instructions at the time, but all I could find were tuts! So eventually the details became clear to me on what to do, and I got it done. The app worked pretty good after that, but not as well as I would have liked. Then the all-star dev known as Rahim-US released a patch for it, that I applied to CTF Tool after modding it, and it works a lot better now after that. So here it is, ready to use.

To install it, just right click on "CTFtool_GUI.exe" and run it as an administrator (it even works on Windows 8), and that's it. If you ever receive an error with the app, stating to re-download the program, just uninstall it, re-extract it from the archive, and re-install it (so keep an archived copy of this file on your HDD). Also, I suggest you always run the app as an admin. That re-download error seems a lot less likely to happen that way. 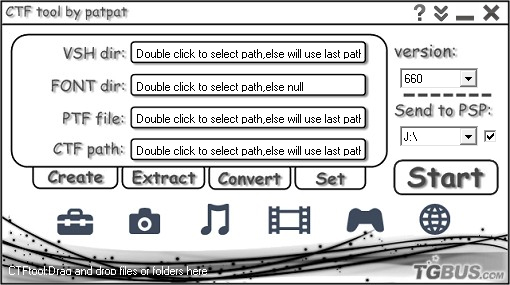 If anybody is either unfamiliar with using this program for creating a CTF, modifying one, or updating one for another FW, I'll try to help if I can. I know how to modify and update CTFs to an extent, but I'm far from an expert at it. So if the help you need that is beyond me, sorry, you'll have to seek elsewhere. There's PLENTY of tutorials all over the web on it, and on here of course. But I'll be happy to assist if I can, as I'm sure others on here will be as well.
Advertising

Could you please refer to this thread? viewtopic.php?f=27&t=39028 Any idea what's wrong?
Advertising

I really have no clue what's going on with that. Never encountered or experienced that, that I recall. If you haven't tried installing it as an admin, then you should try that. I know it works on Windows 7 just fine (cause that's what I was previously using). It also works just fine on Windows 8 (which is what I'm now using). I can't even being to troubleshoot what kind of Windows issue it could be. You def don't need to run it in XP compatibility mode though. Also, have tried re-downloading it? Maybe the download got corrupt or something.
PSP Star Wars 2001 TA-085v1 32GB 6.60 ME-2.3
PSV 1001 3G 64GB 3.60 HENkaku Enso
PSTV 64GB
Top

I redownloaded the program and ran it as admin and it installed just fine, but the gui is stilled messed up. The program still works just fine though. What programming language is the gui built in? Is it possible I'm missing the wrong C++, .NET, or Java runtime from the correct year version it was compiled in?

What's new about these did you actually build/fix anything or did you just add 660 folder (along with decrypted .prx and .ini files) into base folder?

jhuebert95 wrote:I redownloaded the program and ran it as admin and it installed just fine, but the gui is stilled messed up. The program still works just fine though. What programming language is the gui built in? Is it possible I'm missing the wrong C++, .NET, or Java runtime from the correct year version it was compiled in?

EDIT: I just now realized that the problem is a lot simpler than I thought. The only problem with the program is that the background image is the wrong size. Can the size of that image be changed in the .ini file?

I'm sorry, but I have no idea what programming language the utility was compiled in, or anything related to that. As far as the background size, I have no idea why you're having this issue. I've never personally encountered it. Neither on XP, Vista, Windows 7, or Windows 8. I've also never heard of anybody else every reporting such an issue. Did you try re-downloading and re-installing it? If it's still messed up, then it sounds like it may be some sort of Windows issue or something. But, honestly I have no idea. Your guess is as good as mine. Hopefully somebody who can help you sees this, and can help. Another option would be to post up for help on endlessparadigm.com. They're the scene site that focuses more on CTFs/Themes than any other. That site is where I read the tutorial on how to partially mod this version of CTFTool the way I did.


MrShyCity wrote:What's new about these did you actually build/fix anything or did you just add 660 folder (along with decrypted .prx and .ini files) into base folder?

To be honest Mr.ShyCity, I don't remember fully what I did, in detail, to modify this in the way I did. I know I followed the first tutorial by sal000 on endlessparadigm, downloadied a particular CTF Tool 6.60 compatibility files, and replaced and/or added them to CTF Tool GUI [v5 Beta 2], and a modified profile.ini file (IIRC). I also may have dumped some of my 6.60 files, and added/swapped them out with some of the files in CTF Tool. To be honest I don't remember. This was years ago. And I haven't had to mod my CTF Tool GUI again since. It's never crapped out on me. Also I decided to to change to version of profile.ini, in CTF Tool, from 639 to 660. I have no clue if that did anything, whether negative or positive, but it seems like a good idea (to me), and my modded version worked lol. It worked especially well after I applied Rahim-US' CTF Tool GUI patch, that he released for CTF Tool 6.60 compatibility and functionality. That was the other thing I did to it, after swapping the files out with other (6.60) ones, swapping the profile.ini, and modifying the version of it. So that's the best I can explain, as far as what I did to it. And it works well. So there ya go my friend.

jhuebert95 wrote:I figured it out you guys! Ctftool GUI doesn't support high dpi. I set it back to 100% and now it's perfect!

Glad you got that sorted out.

jhuebert95 wrote:Do you have any plans to make the automatic conversion work with 6.60?

I really have no idea how to do that! Afaik implementing that would either require patpat finding his CTF Tool GUI source files, and knowing the utility's programming language, or a recoding or modification to the app that I'm simply not capable of. All that I did to it, is all I'm capable of doing to it atm.
PSP Star Wars 2001 TA-085v1 32GB 6.60 ME-2.3
PSV 1001 3G 64GB 3.60 HENkaku Enso
PSTV 64GB
Top
Locked
13 posts