HENkaku is a native Homebrew Enabler for the PS Vita and PS TV. It lets you run homebrews on the PS Vita
Post Reply
9 posts • Page 1 of 1

Zombiebound Reloaded is a 3D FPS zombie survival game for the PS Vita.
It plays very similar to CoD Zombies games. It is developed in Unity with high quality assets carefully optimized for PS Vita.

The game features three levels. The "Farmhouse", the "Abandoned Store" and the "Hospital".
Current version of the game will also have 8 weapons in total. Like the first game your character will be able to hold up to two weapons. His main weapon is always a pistol with infinite ammo, while the secondary weapon can be purchased from the various points of each level (they will appear as a graffiti on walls). Also you can purchase new weapons and levels from the in-game Store using gold bars. You get rewarded a gold bar for every 10 zombie kills.

Unlocked weapons will be available for the Lucky Crate. The Lucky Crate is also a brand new feature that gives you a random weapon from the available and costs 1000 points. You can find it by exploring each level.

Hi-score is saved for each level locally and you can view it from the main menu. You can also adjust aiming sensitivity to your liking.

More updates will come latter with new content and improvements thanks to your feedback. For all your suggestions or ideas about the gameplay you can comment here or you can contact me with a pm on my Twitter page.

Special Thanks:
- the FAPS Team for the reF00D plugin for making this possible 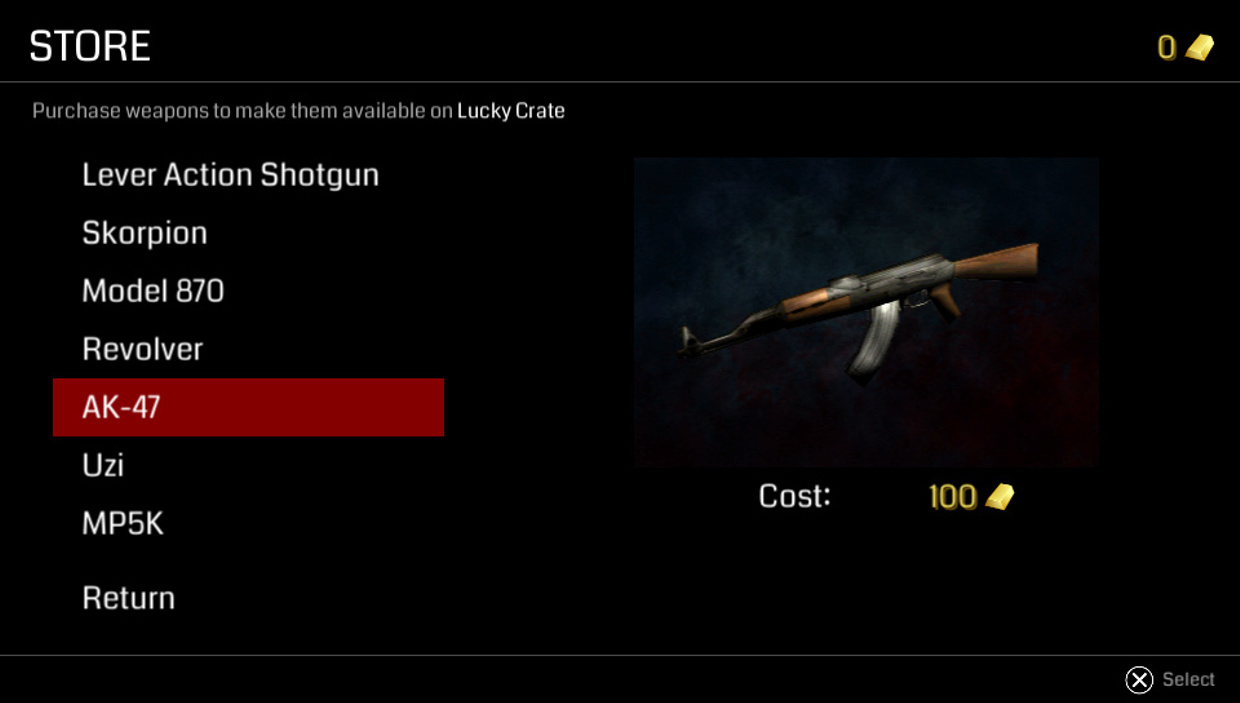 
DOWNLOAD:
Version 0.21 (fixed version):
https://drive.google.com/file/d/15nvi9m ... Fcjtw/view
Remember to leave your comment with your impressions/suggestions about the game.


If you want to support my work you can become patron and you will also receive all my latest news and updates about Zombiebound Reloaded in time.

So... This looks pretty sweet.
Advertising

Iron sights need to be slightly adjusted, it would be cool if the Zomebies made a groan noise or footsteps or something. They can sneak up on you pretty easy. Fantastic though.
Does it quit? If not, then it's legit... Too legit.

dmaskell92 wrote: ↑Sat Feb 02, 2019 3:46 pm Iron sights need to be slightly adjusted, it would be cool if the Zomebies made a groan noise or footsteps or something. They can sneak up on you pretty easy. Fantastic though.

I'm glad you like it.
Thanks for the suggestions. Zombie sounds will be added in the next version, plus gameplay improvements.
VitaHEX Games
https://www.patreon.com/vitahex
Donate with PayPal
https://twitter.com/vitahex
> Click here for all my Homebrew Games & Apps <
Top

There was a bug in Zombiebound Reloaded version 0.2 that was causing the shotgun to appear in misplaced position. Please download the fixed version 0.21 here: https://drive.google.com/file/d/15nvi9m ... Fcjtw/view
VitaHEX Games
https://www.patreon.com/vitahex
Donate with PayPal
https://twitter.com/vitahex
> Click here for all my Homebrew Games & Apps <
Top

Frames drop a lot with the random box. I like what you're doing though.
Does it quit? If not, then it's legit... Too legit.

This Game really looks great.
Thanks for the hard work, I truly appreciate
Your hardcwork sir.
And This game also remind me Resident Evil 4 game.
Is it possible to port Resident Evil 4 game with unity engine for Psvita?
Thanks sir for every games.
Top
Post Reply
9 posts • Page 1 of 1