Here is a huge post with the most popular 50 homebrews and tools of the past year for the PSP and the Vita in our database. I should have published this one several weeks ago but didn’t find the time to prepare the list recently. If you are new to the PSP/Vita scene, or if you’re looking for some exciting new content to try, this is what you are looking for! You can find more homebrews on /downloads, and don’t forget to add yours, and to rate your favorite ones. No login is required!

Most of the homebrews are compatible with both the PSP and the vita (in the case of the vita, you’ll need to run VHBL or CEF)

This is the Netfront Browser homebrew for ARK eCFW, the original version isn’t able to exit in ARK, this fixes the bug.

Netfront Browser for ARK can be downloaded here

This is a space shooter inspired by the Touhou project, a series of indie shooter games.

Also known for its longer name kene-touhou-mohofu, this game is cute and action packed. Awesome graphics, music, and overall realization will make you doubt this is actually a homebrew

Touhou can be downloaded here pyMenu is an alternate menu for HBL, PRO and CEF.

pyMenu can be downloaded here

A game designed to help learn Japanese by providing lessons and interactive games to help memorize words and phrases.

Learn Japanese can be downloaded here

A CTF Theme loader for your PSP

CXMB can be downloaded here Fishing Simulator! For every fish you are given a certain amount of money (depending on the weight of fish caught). The money is needed in order to raise their standards, leading to the discovery of new lakes, and therefore a new fish. And also the money needed for the store to buy reels, rods, woods. Includes an MP3 player

Fishing can be downloaded here

Sonymon is a 2d game where the player can play in one of two modes:
story mode, or free roam…..

-In story mode the player witnesses the creation of “Sonymon” and struggles to
fix the mess they cause.

-In free roam the player walks around collecting items and unlocking secrets, while battling and finding new sonymon.

Sonymon can be downloaded here

NZP is one of the most advanced Quake mods around here. If you haven’t heard of this game, the goal is to barricade yourself inside a house constantly attacked by zombies. There’s no doubt you’ll die eventually, but the question is: how long will you last?

If you enjoy games such as Tyrian, or Rrootage, Silveredge is for you. AndrewYY worked on this game for one year before submitting it to the Genesis competition, and it shows. The graphics, audio effects, music, menus・everything is really polished and very impressive. From the very beginning of the game, you get into the action, the controls are explained as a quick element in the story, and, well, that痴 a detail but it痴 the kind of stuff that gives us the impression of playing a professional game.

Silveredge can be downloaded here

If you don’t know what Pro CFW is yet, here’s what their google code page has to say about it:

PSPokemon Grey is a Homebrew  based on PSPokemon! It is a Fanmade Pokemon Game.

Cool application that gives you the default password for some routers. Useful if you lost your password.

Wifihack can be downloaded here

Important note: You also need to download the Official Firmware you want to downgrade to in addition to this download

An Alternate Menu for VHBL and TN CFE created by wth a.k.a. Yosh.

XMB-like menu, with horizontal sliding instead of vertical like the regular xmb
Supported fonts : supports eboot titles with japanese fonts or european fonts, and utf-8 in general

yMenu can be downloaded here

Build your own world, in this 2D Clone of Minecraft

Mindcraft can be downloaded here Naruto Ultimate Ninja Battle is a Beat em Up Homebrew Game which plays in the Naruto World up to the Newest Events! It is made by shaplayer in LUAPlayerPlus and is based on the Battalla ninja v2.5-Engine by tonos!

Polyon Hockey is a mix between tennis and air hockey all in a neon decor. Here you can challenge a friend or battle IA with three levels.

Polyon Hockey can be downloaded here

A mod which adds more terrains to s4inex craft

This is a mod of MVSPSP.
MVSPSP is a NEOGEO Emulator made by NJ

In addition to the features of MVSPSP, this mod adds the following:
1.Based swarzesherz’s mod
2.Spanish added by swarzesherz (Of course, these support Japanese and English, too.)
3.Cheat added by Davex
4.Work on PSP-3000, Go, Street, eCFW
5.Added a few fix

Unofficial NEOGEO Emulator for PSP Mod can be downloaded here

All PS Vita CEF users have heard of Mishka84’s Multi-Menu Loader, which includes the menus made for eCFW & many other options, but don’t confuse this with Acid_Snake’s multiBootMenu.

This one’s an unofficial v2 release, & in it the things users usually don’t like are made better. Such as, they don’t want a credits menu… removed! They don’t like seeing the app name instead of seeing eCFW

This version has much better graphics in all menus, + Netfront Browser. Replace your XMB with this nice customizable environment

SHELL can be downloaded here

Nintendo 64 emulation at its best! DaedalusX64 is the direct successor of Daedalus

DaedalusX64 can be downloaded here

The first game from “Team Zenyth”, a french team of devs. This game is a clone of the well known mobile game Ninjump. Game is in French but should be easy enough to understand

Stickman Jump can be downloaded here

CEF 6.60 TN can be downloaded here

have you just updated your psp to the latest Official Firmware and want to play homebrew? good news for you, hbl lets you do just that. No additional download required, just run HBL directly from the PSP Menu, and enjoy playing all your homebrew on 6.60 ofw, without the need for any complex hack.

half byte loader (hbl) can be downloaded here

Bookr can be downloaded here

A utility to create, draw and edit images.
Easy to use with many tools such as pipette, various effects, color palette …

The PSPIMP can be downloaded here 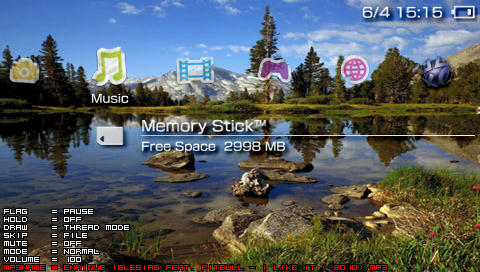 listen to your favorite MP3 tracks while on game mode. Plum’s release of the app is basically an updated version of the old music.prx plugin, but with some added features and enhancements.

mp3Play can be downloaded here

download homebrews directly from your PSP with this nice homebrew store!

PSPInstaller can be downloaded here

FTP For PS Vita can be downloaded here

e[mulator] can be downloaded here

A plugin that stores your saved games in plain text in ms0:/PSP/SAVEPLAIN. Useful to tweak your savedata: cheat, recover savedata that refuses to work after a firmware update, etc…

Install in ms0:/seplugin and edit your seplugins/game.txt file, like for any other PSP plugin.

Savegame Deemer can be downloaded here

Since it was released in 2011, Lamecraft, a great Minecraft clone, has never lost its popularity. Its creator Drakon updated it to make it compatible with VHBL/CEF on the PS Vita! PSP Revolution can be downloaded here

PSPDOXMANAGER can be downloaded here

CWCheat can be downloaded here

Mod of the original Pacman plugin, which has been adapted for use in the new HEN, this plugin named VideoPRxModule can take video on the XMB in. GIF, make catches in the menu and in-game, they’re stored in the TIM-Record folder that is automatically created when recording a video. Catches the saved in. BMP and stored in the PHOTO folder by default.
Controls:
Note: To capture / stop button.
Note + R Trigger: Start recording 240x136px size.
Note + R Trigger + L Trigger: Start recording 480x272px size.

VideoPRXmodule v.0.33 can be downloaded here

VHBL (Vita Half Byte Loader) is a homebrew Loader for the Playstation Vita. It allows you to play fanmade games and emulators on the PS Vita

This is a mod of NCDZPSP.
NCDZPSP is a NEOGEO CDZ Emulator made by NJ.

Cube Runner Advanced is a PGU powered puzzle game (engine originally by Stinkee2) in which the goal is to avoid being hit by cubes whilst trying to complete various levels (currently 4).

This is an update by Zix of Stinkee2’s original game entitled “Cube Runner”, the new version adds 3 new, more difficult levels as well as updating the original.

Cube Runner Advanced (by Zix) can be downloaded here

6.60 ME can be downloaded here Krap-psp is the swiss-army knife for your PSP. With this plugin, you can directly from the XMB:
Enable/Disable psp charging, Automatically set cpu/brightness to low, Automatically sleep on a certain battery percent, Easily execute Shutdown,Sleep,Reboot(VSH) on a key combo, Set auto timer for sleep and shutdown,…

krap-psp can be downloaded here

Often compared to commercial games for its replay value and quality, Wagic is a heroic fantasy card game, in which you fight as a wizard against the computer. As you win battles, you unlock new game modes and earn credits that allow you to improve your army. Wagic is community driven, entirely customizable (you can create themes, mods, even new rules), available in several languages (English, French, German, spanish, Italian, Portuguese, Chinese, Japanese, Serbian), and open source. It currently runs on the Sony PSP, Windows, Linux, and N900 (maemo).

Wagic, The Homebrew can be downloaded here

The most popular File Manager for the PSP SNES emulator. The most stable and praised SNES emulator in the PSP scene. Runs pretty much all games at full speed, has network features.

SNES9xTYL can be downloaded here

Liquidzigong’s Iso Loader for the PSP.

Again, feel free to add your homebrews and vote for your favorites in our community homebrew database, it’s easy and no login is required!