The PS1 was not only a very successful console, it also marked the the first mainstream hacked console that led to the creation of hombrews and downloadable pirated games. But how did the security work and which methods were used to hack it?

The PS1, much like the NES and SNES before it, used one single security measure for both preventing unauthorized games and imported games from playing.
The PS1 however did it differently, and although I’ve already reviewed its security measures some time ago, I will briefly go over it again.

Many thought the PS1 security was based on the discs being black rather than white/yellowish like most recordable CDs, but we all know that’s bullsh*t. These games had one thing different from conventional CDs: they have a special water-mark that can only be produced when pressing them and contained the regional code of the CD. The region code was also hardcoded into the system. When the PS1 reads this watermark from the game it compares it to the one it internally has, if it matches, the system boots the game, otherwise, it refuses to boot anything from it. This prevented games from other regions to be played, but it also prevented unlicensed copies of the game as these do not have a watermark at all, so in the eyes of the PS1, an imported game is no different from a pirated game.

Although there are a few ways to circumvent this security, like the expansion port on early PS1 models that was later removed, there are two other mainstream ways I will review here.

The first and most popular one was by means of modchips. We all know today what modchips are, but it wasn’t until the PS1 that they became widely popular, mainly due to the ease of installation and little risk they presented to the system, you barely needed any soldering skills to install them, and even if you couldn’t, installation by a professional was dirt cheap.
Modchips work by simply injecting the system’s region into the live stream, bypassing all checks on the CD drive, so it doesn’t matter what the CD drives report from the CD, the region code will always reach the system, so it will give a green light and boot the CD. 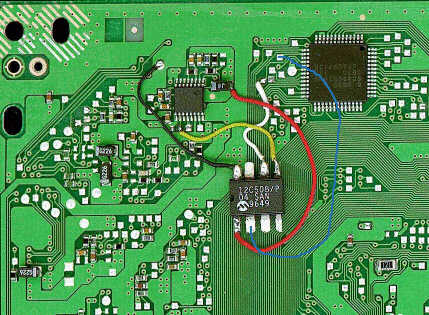 Although modchips where really clever there was an even cleverer hack that exploited one of the system’s CD “features”.
When encountering a disc read error the PS1 didn’t give up so easily, it retried reading the disc over and over again for a few seconds before giving up, this allowed many games with small scratches to still be playable and eliminated any timed issue.
To understand why this was hacked first we need to understand how the PS1 reads the disc.
First, the PS1 does the region check on the disc, once that check has passed, it goes on to reading the TOC (Table Of Contents) on the disc, then proceeds to do another check on the system region, once that check is met, it goes on to read the game executable. So the reading process gets summed up to this:

If you remember the NES there was hacked cartridges that took in a licensed game and replaced all but the checks with an unlicensed game, the goal here is to do the same, so we pass from this:

We can’t of course replace the game data on the original disc, but since the PS1 retries to read the disc for a few seconds before giving up we have a more than enough margin to swap the original disc with an unlicensed one, the only thing we have to do is trick the PS1 into thinking the CD lid is closed even if we open it, and that can be done by pressing down on a button in the motherboard, which the PS1 uses to know when the lid is open or close, if the lid is closed, it pushes down that button, so we just gotta fix that button so it’s always down, ducktape will do.

With the birth and rise of the Sony PlayStation we saw not only the birth and rise of modern hacks like modchips, we also saw some pretty clever hacks that were born from stupid mistakes made by Sony, but again, this was their first time to they were bound to make stupid mistakes, I doubt we see another Sony device fall victim in the hands of disc swappers, but that won’t stop them from making more mistakes. Stay tuned for more!