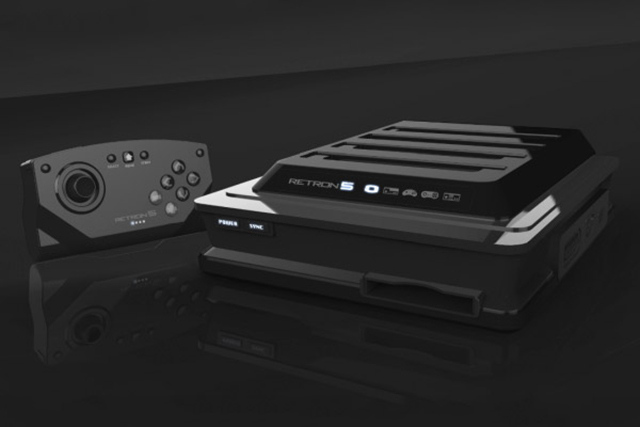 The RetroN 5 was officially announced at MGC on 23rd March. It is a console where you can play 9 different retro consoles, and will be coming in June. Here are the consoles you are able to play:

But that’s not all. The console also has it’s own wireless Bluetooth controller, sleek and modern looking but also has that classic look to it. You may think it’s a bit ugly, but remember, it has to accommodate for 9 different systems. It has a connectivity distance of 15ft, like all controllers nowadays it features a D- pad, shoulder buttons, 6 face buttons a home button and 4 LED lights (for player number, believe it or not.) It will also have a lithium ion battery which can be recharged by USB, via micro USB.

The home button functions like the PS3 with two functions, to connect the controller to the console, and also to access the user interface.

My OCD is kicking into overdrive, why can’t those banners be in line!

The UI may not be as fancy as the infamous XMB or the pretty Live area, but it is very simple, clear and easy to understand. Which is just want from a system like this, quick to access and good for simple people like me! 🙂

The RetroN has some interesting features, one of the most annoying things about the Gameboy games I played was the saving. During some games, the save points were what it seemed like, light years apart. With the RetroN 5 however, you can save state at whatever time you like, and even better when you switch off the console, the system makes a save state automatically on its own!

Now if you were to buy a SNES, NES, Genesis, Gameboy /Colour/Advance and more and somehow engineer them to work on your TV, you’d be spending quite a bit. Well no, the RetroN will cost around $100/£65.
[Convert to your currency here]

As well as producing 9-in-1 consoles, they also supply accessories and spares to pretty much every console apart from the beloved PS Vita

The Super RetroN 9000
(picture from http://www.youtube.com/user/16bitghost)

EDIT: Thanks to DeathOfChaos (lol) he reminded me that I left out the rear of the console! So here it is.

How will i connect it to my tv!!

I was assuming the USB port was for transferring game saves, but they say on their website that it will be for ‘USB port to allow for charging of the wireless controller’
This bit is really cool, The RetroN, like all consoles have used HDMI and AV output, but this is where it’s different. Many people say they can’t see *much* of a difference when converting from AV to HDMI, but on the RetroN 5 the difference is huge (from what they showcased anyway) see below!

It does seem a little bit squished though.

They have also improved the sound quality of the system, which sounds very nice for modern day use, although the vocal quality is still reasonably hard to understand (it always was on retro games) the sound quality has still been improved dramatically.

can i overclock it?

Of course you can! a great feature of this is also how you can speed the game up, so if you for some reason want to finish that 100 second fight in 50 seconds, You can do so.