HENkaku is a native Homebrew Enabler for the PS Vita and PS TV. It lets you run homebrews on the PS Vita
Post Reply
63 posts

I have ported ReGameDLL Lite, a Counter-Strike server library, and it seems to work fine. This means that if you install it, you will be able to host games on your Vita. The library comes with bots (ZBot), so you'll also be able to play local bot games. It is probably still unstable, so use at your own risk. 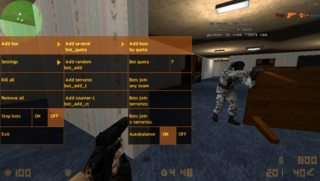 To download and install it, proceed to this page. That release includes the library itself, bot navigation files for stock CS maps and a new touch.cfg that enables a bot control menu and also adds numeric keys to the touch screen (press the arrow on the bottom of the screen to show them, you can use these to navigate the number menus in CSDM and Zombie Mod). Please read the notes section on the release page carefully before asking anything.

You can use custom skins/models, but some of them probably won't work correctly, especially the more detailed ones. You should also install them to ux0:/data/xash3d/cstrike/custom to avoid replacing original files, so that directory would look something like this:

Some servers automatically ban anyone who isn't connecting from an Android or iOS device to avoid cheaters, nothing can be done about that. cs.fwgs.ru does, in particular.
Advertising

Turns out Release 4 is not compatible with some or all Release 3 saves, just like R3 wasn't compatible with R1 and R2 saves. This is something to be expected of all future releases until I figure out how to switch to a better save/restore system instead of the currently used function offset based system.
Advertising

These bots are pretty decent . one last thing i wanted to ask is it possible to ise csdm with these same bots im assuming you have to patch it in. Other wise these bots run pretty good on some maps with 13 bots and me it stays at 30 fps the lowest is 25 maybe with my custom weapons i believe they are consuming the ram... Anyway counter strike deathmatch would be awesome so would zombie mod i cant seem to join the online serve that they have... Anyway you work is awesome thank you very much...


The scr thing i was talking about is ironsight .. Is there a way to add ironsight to engine look up ironsight HL1 or counterstrike 1.6 ironsight


Have a great day
Top

I don't think this version of ReGameDLL supports CSDM, but I think I could backport it from newer versions, it's not very complicated.
Parabots or some other HLDM bot are definitely possible to port, so I'll probably port them later.
I don't think Xash can support these ironsights scripts/mods. You can still get the zoom effect by adding something like this in your autoexec.cfg or config.cfg:

Thank you for your response once again is there a way to reduce the loading time in cs 1.6 i mean i know its a port but sheesh it takes my vita almost 5 or more mins to load up 1 map then if the map has no nav points then its a 12min process to do everything and reload map on vita and save nav points...

It just takes so long to load a map even when i have no custom files ... Anyway still in all bots are good and i am enjoying myself thank you again.. Cs 1.6 is a classic and one of my favorite pc games of all time i was a teen when this game came out played woth two cpus on lan had so much fun

Oh almost forgot do you think csdm for vitaxash3d will be released soon i need some deathmatch action with these bots. They are pretty decent

Ennoy ur day thanks again
Top

On stock maps load times shouldn't be that long. On my Vita most of them load in under half a minute. What maps are you loading that take that long? Are you using SD2Vita or something? Can't do anything about nav building though, it's a very resource intensive process. You can generate nav files on PC if you have CS and ZBot installed and then copy them over to Vita.

Don't know about CSDM. I'm currently a bit busy with other things.
Top

Yes i am using sd2vita and my maps are just as small maybe i sbould reinstall everything and see what happens maybe its the sd2vita i will test again when i get off work.. Thanks for the quick response
Top

I have not tested it with SD2Vita and I don't know how much it affects read/write performance, but I suppose it could depend on what class of SD card you have. Reads and writes are generally pretty **** slow in Xash though, this is a known issue.
Top

fgsfds wrote: ↑
Sun Apr 01, 2018 4:53 pm
I have not tested it with SD2Vita and I don't know how much it affects read/write performance, but I suppose it could depend on what class of SD card you have. Reads and writes are generally pretty **** slow in Xash though, this is a known issue.

Load game dont work for me, when load a game I´m apear out of bounds.
Top

I found out my issue its the custom files im using i tried a smaller pack and the load time was much faster. Ibtried stock and it loaded in about 30 seconds like u stated so just know if you add any custom files it will slow down your game loading speed and that also affects your loading when joing a game online and map takes longer to load if you have no .res file for it
Top
Post Reply
63 posts