Hello all of you,
This is my second entry for the PSP Genesis Competition called NMS which is the short form of No More Sharing but I prefer NMS

What does this do?
Don't you just hate it when people come and beg you to let them play your precious PSP? I do, so I made this. It is a small application built to scare people who want to play it. This is allegedly a message from big $ony telling you that you used unofficial applications and that has gotten 369 errors in the flash0:/ which has to be formatted for anything to be recovered. This then supposedly formats the flash0:/ and well, that's kinda it

I would recommend using AutoStart v5.5 in conjunction with this


JUST A CONFIRMATION: THIS DOESN'T FORMAT flash0:/ AND WILL NOT BRICK YOUR PSP 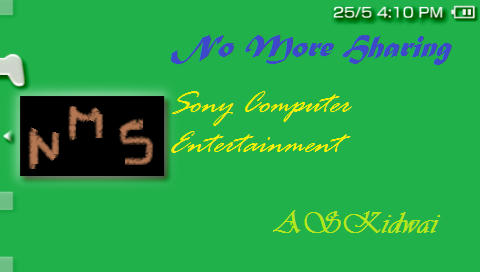 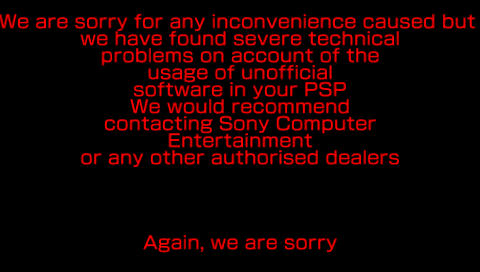 Credits
Me for gfx, code
Zack for the interpreter


Feel free to give me ideas to be added

Sorry, it is unsigned

If you could use that vshlib (I think that's what its called), it would probably help it look pretty good.

EDIT: That might not be the name of it. The library which makes it "easy" to create programs that look like the XMB.

by Necrofenser
Also try to make it work like plugin, not like app. So when someone start the game, app or something else, after 3-5 minutes NMS will start and it will show warning message and shut down PSP

by ASKidwai
I think you mean VLF...

I'll look into it. Lua isn't that powerful so I can't make plugins

So, nope. PGE can but I don't know pge

by wololo
Entry accepted, welcome to the competition

by IndigoAK
This needs some major editing if you want to really fool people.

Without changing your original wording, I've taken the liberty of correcting some of the more minor grammatical errors.


We are sorry for any inconvenience caused, but we have found severe technical problems on account of the usage of unofficial software on your PlayStation Portable. We would recommend contacting Sony Computer Entertainment or any other authorised dealers.

Again, we are sorry.

As for tips on how this can be improved?

Firstly, Sony would probably say something like, "Unlicensed software has been detected in use on your PlayStation Portable system. Please contact PlayStation customer support for further assistance." They would then list a couple places where you can find such support - a phone number and probably the web address for support on PlayStation.com.

Second, in official documents, Sony uses the full name of the system, "PlayStation Portable entertainment system" or something similar. They rarely ever refer to it as a "PSP" unless there are a lot of references (the EULA for instance).

Third, Sony doesn't generally apologize for inconvenience caused until the end of their messages.

by ASKidwai
Thanks for your replies.
I'll look into correcting it but the limitations of the screens really kill it and I can't make it look "more official" because of the absence of VLF Lib in LPE v8