We're a two member team and as soon as we heard about this compo, we put our first game (Frankie's Quest) on hold and started work on a new game!

Our game is called B-Gen and is currently in first playable demo stage with a single playable level. We'll post details related to the game's story soon, but for now it suffices to say that the game is about matter, anti-matter and their struggle for universal dominance during the early stages of the universe.

We're great fans of the industrial rock band Nine Inch Nails and have made this game as a tribute to them. B-Gen uses music from their free album - The Slip. However, the music is not included purely for aesthetic purposes; it plays a major role in the gameplay. This means that it is recommended to play with sound on (headphones would be best) for the full experience.

Menu Controls:
up/down arrow keys to navigate options.
cross to select an option.
circle to go back to an earlier menu.

Please download it, try it out and give us your feedback so that we can improve it.

Features coming soon:
* More levels
* More types of (exotic) matter (we've already implemented Black Holes, but they're not included in the demo)
* A special ability for the player: "Hyper Sense"
* ?

Working with tn hen and signed hbl113. B-Gen isn´t there a hen with that name. However good luck!
Advertising

Thank you for trying it out. I just googled, and found that there's a CF called GEN-B for HEN!

However, when we created the name for our game, we had no idea about this; in our context, B-Gen is an abbreviation of Baryogenesis.

Here are some screen shots of the game for those who haven't already seen it: 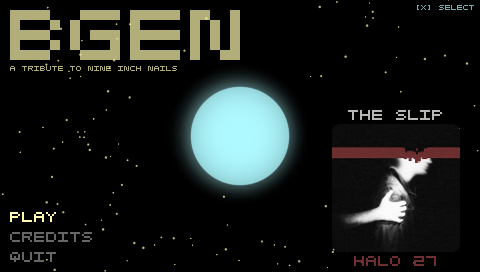 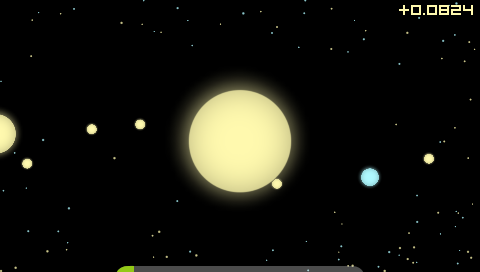 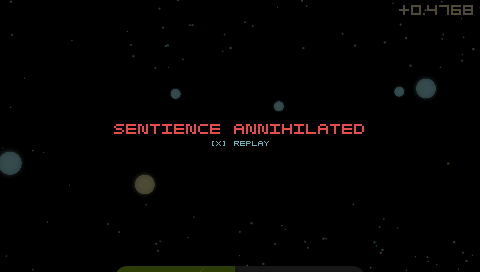 Thanks for reading!
Okapako
Top

Very nice entry. I'm going to not check, and assume that NIN distributed their album with a "free for all" policy, allowing their fans to redistribute derivative work

Welcome to the competition, entry accepted.

The first play experience is a bit frustrating given the inertia of the blob. I assume that once you play the same level a few times you get used to the rhythm + you "know" what's going to come to you, but the first time I played, my gameplay was pure randomness

Thank you for the feedback! And for accepting our entry!

Due to the nature of the game, we can't really prep the player in advance about what he/she's going to encounter. But good that you mentioned this point, we'll take it easy on any further randomness we might think of introducing into the game...

Just for additional info, NIN's 'The Slip' is licensed under a Creative Commons Attribution-NonCommercial-ShareAlike license.
Website: http://theslip.nin.com/
(Although we're permitted to, we've not made modifications to the tracks in any way; we're using them as-is).

P.S. My avatar is a picture of my dog, scaled down.
Top

@Maxaxle: Thanks for giving it a try and providing us with feedback! We agree that the blob's movement feels a bit slow at first, but as Wololo mentioned, we expect that the player will get used to it after playing a few times. Also, you're supposed to destroy the antimatter (blue) blobs by colliding with them, not avoiding them!

We're sorry for not explaining it earlier, but the basic game rules go like this: Although these rules seem little complicated, they are actually quite easy to follow once you're in the game playing it. If you have any questions regarding this, please feel free to ask! Hopefully once we implement some kind of tutorial level, things will be clear for everyone.

Thanks for reading!
Okapako
Top

Okapako, I must thank you and Crystalswordsman for such a wonderful piece of art. I wish you guys the best of luck with this project/entry.
Top

@Arctic_Raven: Thanks for the appreciation!
We're working hard on new cool features and levels. If you liked the demo, then we hope you'll also like the next update.

First of all, you did a great job so far!

Are you using some kind of framework? And is it available for the public?
Top
Post Reply
35 posts