ali_ihsan21 wrote:Sony never produced 32 GB M2, there is maximum 16 GB and there are no adaptors to use micro SD inside afaik.

I am aware of this. The topic has evolved as people have replied. What you responded to was an inquiry regarding the psp 1-3k. Not the go
Advertising

Yes there is a difference between a sony M2 and a micro SD, the operation modes and Voltages.
I've had access to sony's specifications but no more now.

About that mod, yes there were people which did something similar on a psp 1000:
http://www.acidmods.com/forum/index.php ... 3f421d462b
In the second pic (on the right side of that pic) of that thread you can see the opened pro duo sd card adapter, there is a small controller board.
This board does nothing else than convert the signals from pro duo to sd and vice versa.
Now you would need this small controller board of a photofast cr5300 or cr5400, but keep in mind, IF you make such a mod to a psp go, the pro duo adapter might not be detected due to the M2 having two operation modes (3,3V and 1,8V for mobiles). It could be that the M2 slot of a psp go does not provide enough juice for the controller board which is built for 3,3V of a standard Pro duo card.

You can remove the micro SD's from the adapter for pin cleaning purposes, just don't swap them and around and power it up.
Best is, you make a small line or mark with a fineliner on one of the micro SD card and the corresponding slot. This prevents you to swap them around.
And yes I have run into corruption without swaping them BUT under certain circumstances.
DON'T use the install function of games IF you use an ISO of that game. Certain games like white knight chronicles origins have this install feature, it actually install parts of the game ENCRYPTED on the memory stick but at the same time your game loads the ISO from there. This leads to install data corruption and save game corruption. So just don't do that, you're actually faster just playing from ISO anyway and will not have those problems.

Certain cards known not to work?..... Its always a gamble. It depends on the trustworthiness of your reseller, if he sells cheap Chinese clone cards mixed into a bunch of good ones, chances are high that it will not work. I can vouche for those as my fist adapter is using two of these:
http://www.amazon.com/SanDisk-MicroSDXC ... ro+sd+64gb
And my second adapter is using two of those:
http://www.amazon.com/Transcend-MicroSD ... +transcend

How often do those not read?... I mostly had problems with repetitive sleep mode and power up but only after the 15th or whatever it was circle.
Sometimes the psp wants a clean restart / boot up. If you encounter such thing just power off the psp and reboot it. Problem fixed.

Um no, you will not run into this problem only reading from one memory if you don't use this on a psp go. Remember the other psp's don't have an additional onboard memory. So everything you have will ALWAYS be on the memory stick / pro duo adapter.
The DUAL pro duo adapter (cr 5400) makes an SD card RAID. You know what a raid is do you? Its a method of spanning memory media together (RAID 0,1,... JBOD or SPAN). What you have in a dual adapter is a JBOD or aka SPAN RAID, is spans one giant partition on both micro SD cards.
They act as one media, HOWEVER INTERNALLY there is a multiplexer inside the cr5400's controller board which switches between one micro SD and the other, but you will never notice this, it has no effect on any software.

About the limits... it can only be tried on a psp with cfw... not LCFW. As an LCFW psp always boots up the OFW first but then cannot access such a huge memory stick you have no way to boot up the LCFW besides using another smaller memory stick to boot into LCFW.

(my first memory stick pro duo was 32MB... so it was a huge leap to 2GB for me and then gradually expanded with the dual adapter 8GB -> 16GB -> 32GB -> 64GB and now I have arrived at the very purchasable limit)
I have not come across 128GB micro SD's yet, I know sandisk has those already but they are not affordable yet.
http://www.amazon.com/SanDisk-Ultra-Mic ... cro+sd+128

But I think 128GB are for the time being more than enough, if you WANT/NEED MORE (pen*s size compare syndrom), just get another adapter and two more micro SD's.

The internet is a bottomless barrel of sh*t, we try to fill it, everyday. But we fail, because its bottomless.
Top

Democracy have countless solutions, so do technology 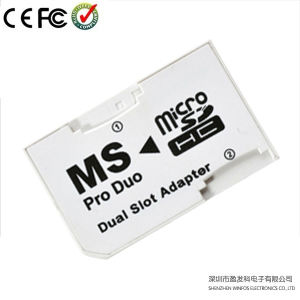 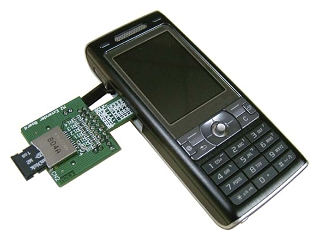 Well for the dual adapter it matters not if you get a transcend 64GB or a sandisk 64GB, just make sure they are from the same brand, same size, same type.
Thats my only advice.
It is technically possible to receive a clone cart via amazon (chances rise with marketplace resellers) but you have certain protections via amazon too so you can always complain and want a refund.

What I still can remember is when you do go with two 64GB cards then sometimes the psp does not want to format the pro duo adapter, and when it does, it is formatted but has no directory architecture on it, you will have to copy over everything from your old memory card.
Remember that only (in my case) copying via the psp's usb slot does work. So it is not the fastest connection but it gets the job done.

About the adapter itself, it does not matter if you get an original photofast or one of the ten-thousand clones. I have had dirty / bent / broken pins with both of them.

So then I wish you best of luck, and many happy hours with your 3k and its new super huge pro duo adapter.
If you have further questions just post here again.
The internet is a bottomless barrel of sh*t, we try to fill it, everyday. But we fail, because its bottomless.
Top

suloku wrote: Someone should make something like this for the go (not going to happen but...)

I still have one of the firsts. I also have the neo pad 8 in 1... the old days when memory sticks were veeeery expensive... 4 gigs at that time on the PSP was humongous
They released a more compact version too, with only the 4 GB mini hard disk.

I guess it's not gonna happen for the go, but I think that the 16 gB the internal storage has is pretty big (well, I did use the 32mB that came with fat back in the day... man I feel old).

Also, I think any linux distro would be able to read your 128 mB pro duo card, I'ts probably windows complaining about it not being in ex-fat.

I found that mod it fits inside PSP-go under the battery, its brilliant but need a lot of work.

I've just picked up 2 PSP GO's. Both now have permanent "CFW 6.61 Pro C ∞"
For one, I bought a 16GB Mini M2 card to boost it's storage capacity and for the second, I've researched how to increase the storage soldering a microSD card.

My plan is to first, remove the back casing and battery of the PSP GO.
Then place a 32GB Micro SD into a Pro Duo adapter (for PSP/PSP Slim etc).
Then solder (using a ribbon cable) directly the Pro Duo adapter to the Mini M2 slot inside the PSP GO.
Then secure the newly installed Pro Duo/SD card and ribbon cable under the battery and replace the back casing.
Then Format the newly installed memory card.

The plan is that the Pro Duo adapter will bring all the wiring in-line the Mini M2 slot and make the task that much simpler than trying to wire the Micro SD card directly.

I've ordered a 32GB SD card for now but if this is successful, I don't see why (with a decent quality Pro Duo and Micro SD card combination) sizes of (up to) 2T are possible.

Will update if I was successful or not with a guide, if it works.
Top

These sites can give you more info about the process