The changelog of the new firmware is at the very end of the news!

Sony just released a new firmware update for the PS Vita, which fixes the TN-V kernel mode exploit and the usermode exploit titles for firmware 3.01.

Please skip the following wall of text if you are not interested in a little flashback to firmware 3.01 from 3 months ago and what happened in these 3 months. 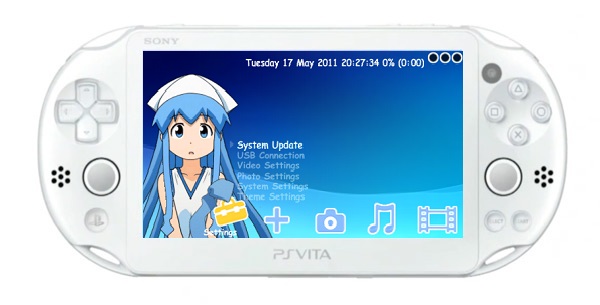 The last PS Vita Firmware update, 3.01, scared a few of us for a few hours, because it patched the exploit title King of Pool. Why this was such a shock for a few of us? Well, it was originally supposed to be the ninja release exploit title for the firmware 3.xx, until we decided against it and then continued to use the game 101-in-1 Megamix, which was later successfully brought to you without getting pulled prematurely (unlike the BEN 10 game, but that is another story).

In the end King of Pool was re-exploitable for firmware 3.01 and people that were stuck at firmware 3.00 (and below) could update to Firmware 3.01 to use the PSN Store, the various Online services and of course Total_Noobs TN-V eCFW.

We gave you the chance for a second (well, technically third/fourth if we count King of Pool and the japanese exploit title for firmware 3.01) game, which now included the australian region. This second chance was not that successfully, since the game got pulled prematurely, like Mad Blocker Alpha for firmware 1.81, thanks to leaks and bragging with knowing the upcoming exploit title.

This hurts the community and does NOT help it in any way. Please do NOT do these things and stay quiet, that is the best thing to do for all of us.

Why I am telling you all these things you might ask yourself… Well, since Sony worked on this new PS Vita Firmware update, that got released just a few moments ago, for a solid 3 months, it should be more than crystal clear that all these fancy things are now fixed. The kernel mode exploit used for using the Total_Noob TN-V eCFW and the usermode exploits for accessing and booting said kernel mode exploit / TN-V eCFW are also fixed and can’t be used at this very new firmware.

But what are you now supposed to do? Well, we can’t help you with questions like “Should I update or stay at 3.01 and use TN-V?“, but we can definitely help you with questions like “Will TN-V / ~insert exploit game title~ work at this new firmware?” and “I missed the previous games, but my PS Vita is still at a lower firmware. How can I get TN-V without updating to the newest firmware?“.

Keep in mind that you can still get TN-V at your PS Vita, if the firmware at your device is 3.01 (or below). With the help of a second PS Vita, or a PS3 (recommended), it is pretty easy to get things to work.

You can transfer exploit titles to your lower firmware PS Vita (some specific games are blocked in some PSN Store regions, but there are still some viable choices, so nothing is lost, except for the bigger selection of said exploit titles) and then use the TN-V eCFW. Okay, since I wrote half a book about the hacking part, the previous firmwares, the most recent exploit game titles for the firmwares 3.01 and some stuff about TN-V, usermode exploits, the now fixed kernel mode exploit and a metric ton of other stuff, let’s now finally get to the new changes of the new PS Vita firmware, and if the firmware contains something special (like enhanced security measurements that are worth to mention, new core-features, new blocked things (like OpenCMA or the PS3 trick), et cetera, et cetera)…


New functions and features of the new PS Vita firmware 3.10

A lot of people might just wanted to check the news for a quick glance at the new features of the firmware 3.10, but then were kind of surprised by the text wall I wrote. I apologize for this, I just felt like it. – You can now display up to 500 applications on the home screen.

– A Calendar application has been added for PS Vita, allowing you to set up gaming events with your friends. Sync your Google calendar to have all your events with you on your PS Vita. You can also share your favorite events by using the Messages and Email applications.

– We have enhanced the parental control features. You will be able to restrict PS Store access, and with a children’s age guide for each level it is easier to find the right level for your children. We’ve also added an information guide for TrendMicro web security.

– 30 minutes has been added in Enter Standby Mode Automatically.

And of course ‘System stability has been improved’, aka. we fixed all your exploit games and the TN kernel exploit.