PS Vita compulsory Firmware 2.61 is out, patches the ‘Arcade’ exploits

That was pretty fast. It’s been about a week since the public announce of a vulnerability in the games Arcade Darts, Arcade Bowling, Arcade Pool and World of Pool; and Sony’s latest firmware 2.61 has already been rolled out a few hours ago to patch the vulnerability.

There’s no doubt that this firmware update is perfectly useless from a gamer’s point of view, and is one of those “improves the stability of the system” updates, a.k.a. “we’re fixing exploits so you won’t play Mario Bros on our $250 device“. No typo on “our” device here, if you thought you actually own your Vita, think about it again 🙂

Needless to say that if you’re currently using VHBL, you should be using OpenCMA to be able to copy your files from and to your Vita without having to update. Updating to 2.61 would make you lose the exploit. Also, as the question comes reasonably often: Sony don’t patch games, they patch the firmwares. Which means that when the games come back on the PSN, technically they still have a vulnerability, but you won’t be able to buy the games without upgrading to 2.61 or higher, technically preventing you from running the exploit. Am I clear? Probably not, but that’s the way it is.

The Z mentioned on his twitter that the update is compulsory to access the PSN and other services (not all Vita firmware updates are like this).

Hackers were fast to show we still have exploits running in the PSP emulator of the Vita, as shown in the screenshot below from The Z. Once again, this was a quick patch to address the issues in specific bugs, but not an attempt at completely patching VHBL related exploits. The cat and mouse game continues. 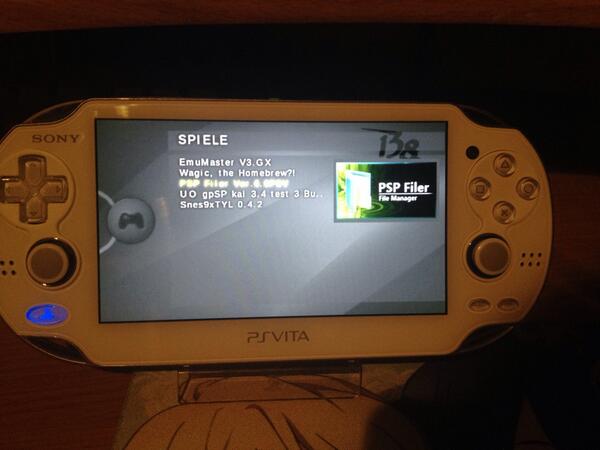